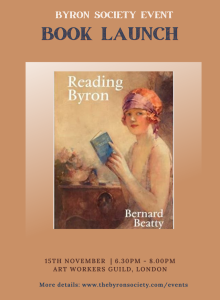 The most important thing to do with Byron is to read him rather than read about him. If we do so, argues Bernard Beatty in Reading Byron his third/new book on Byron, we will encounter not only the music and wit of his verse but also what early readers identified as his ‘force’ and ‘thought’.  They took this seriously and so should we. They responded deeply to ‘dark’ elements in his heroes and in his thinking which many twentieth-century readers and critics patronised or ignored. This is a new and timely approach to reading Byron by someone who has devoted much of his life to reading, writing, and thinking about him.

The event will include a wine reception, interview with Bernard, discussion of the book’s key themes, and some poetry readings.