The way people read these days poses challenges for the publisher of poetry as I explained last time.

It’s hard to show the verse of Don Juan’s verse in unbroken lines across the narrow confines of a phone screen.

Don Juan Canto I on a mobile phone

Unless, you choose a font size so small that it’s hard to read anyway.

Comprehension of the text is a still bigger challenge than the appearance.

“His classic studies made a little puzzle”

Byron wrote Don Juan in a lively, conversational tone. But it addresses educated men — “overheard” by women — of the 18th century.  Contemporary readers may find the context, the references and the grammar are hard to follow.

Byron writes complex sentences, often with several dependent clauses and a latinate construction. For example, he can use a preposition at the start of a sentence, disconnected from the rest of the clause.

Here, is Byron’s description of Haidée’s jewelry at her wedding feast with Juan:

Around, as princess of her father’s land,
A like gold bar above her instep roll’d
Announced her rank; twelve rings were on her hand;
Her hair was starr’d with gems; her veil’s fine fold
Below her breast was fasten’d with a band
Of lavish pearls, whose worth could scarce be told;
Her orange silk full Turkish trousers furl’d
About the prettiest ankle in the world. (Canto III, 72)

It can takes several readings and re-readings to discover that

Byron’s punctuation is idiosyncratic even for his time. Still, apart from the unusual orthography  most of us find such sentences a challenge. We are no longer steeped in formal grammar or the rhythms of classical rhetoric. But these were the foundations of education in the Byron’s time.

Still, we’re not dealing with Shakespeare, here. The text of Don Juan is not that hard to follow, most of the time. Byron uses customary — even vulgar — language. He avoids obtrusive rhetoric, except when he’s being arch. If we have a text in front of us, most of us should be able to puzzle out any grammatical or structural difficulties. We can work back and forward through the verse to reconstruct the sense.

Or annotations and illustrations accompanying the text might help. There are several examples of annotated versions of Don Juan. One is on the website Genius.com shown on th screen of the phone-image above. (But it includes notes only for the first few dozen stanzas of Canto I).

But, for a first experience of a long poem such as Don Juan, it is tedious to have to refer to such annotations.  Who wants to treat poetry like a puzzling computer game using a “walk-through” to help us along? Annotations have their geeky value. But they don’t suggest to new readers that Don Juan is a lot of fun.

What is a “good narration” for this purpose? Listeners’ tastes in narration styles vary. Still, in the case of poetry, a good narration untangles hard language. It does this by varying intonation and the pace of the verse. This highlight the color (rhythm, rhyme) and gives the listener clues to understanding. — usually in the form of emphasis, changes of pace and pauses — that untangle hard language.

But a “good narration” does this in a way you might not expect. It does not treat the poem like a piece of dictation where the listener needs to “get everything right”. That would destroy the our enjoyment of the poetry and make listening a chore.

Rather, a good narration is more like riding in a boat where the stream carries the voyager forward. Voice is a stream, unlike text which is a map. There is an essential component of movement that calls our attention to “keep up” with the flow.

Our inclination as listeners (and even as speakers) is to cooperate with the flow. Word by word or phrase by phrase, our imagination develops a model of an idea suggested by the words. It’s instinctive. We attempt to predict the next word or image (fragment of an idea) according to the model we are working on at any time. As the verse continues we may re-fine our model to fit new information. Or abandon the model, if necessary.

Poetry can delight us by confirming our “predictions” in a comforting rhyme. Or it might contradict our expectations in an amusing or disturbing way. The poet’s skill often lies in finding the “unavoidable” but unpredicted word or idea that moves us. Byron is a master at this. For example, he is adept at using the final couplets in his ottava rima verse for a gag or a surprise. Sometimes, he surprises by continuing into to next verse. It’s all about contradicting our expectation.

Here’s where the flow of narration helps. Byron’s satire sometimes pummels us with gags and bathos. At other times, he flays his targets with a boning knife. Then he delights in slip-sliding from one idea to another, to show-off his breadth. But these effects are rarely at the scale of a word or two. He works up to his ideas over the course of a phrase or a sentence or a procession of semi-colons. Here and there he uses clever innuendo that depends on one or two words. But most of the time, missing the sense of only one or two words or a phrase will leave the effect intact.

It turns out a narration can help a listener who puzzles, for a moment, over a word or phrase by moving on. A reader might ‘stick’ on something they have not quite grasped and start to re-read. As they try to re-orient themselves they risk losing the trace of the verse. But a listener who “goes with the flow” of Byron will often find clues in the following phrases.

The added context will allow them to re-align their “model” and get the drift. At worst, the flow will make any gaps an unimportant part of their experience of the poem as a whole. The temporary distress of mis-understanding is either repaired or forgotten.

Click on the image for a brief MP3 recording (890KB) that illustrates the value of narration using the stanza from Canto III that I examined above.

Don Juan is especially well-adapted to audio because it is a performance: a sort of stand-up comedy. As he said, it’s “a little quietly facetious upon every thing” (Byron to Thos. Moore, September 1818). 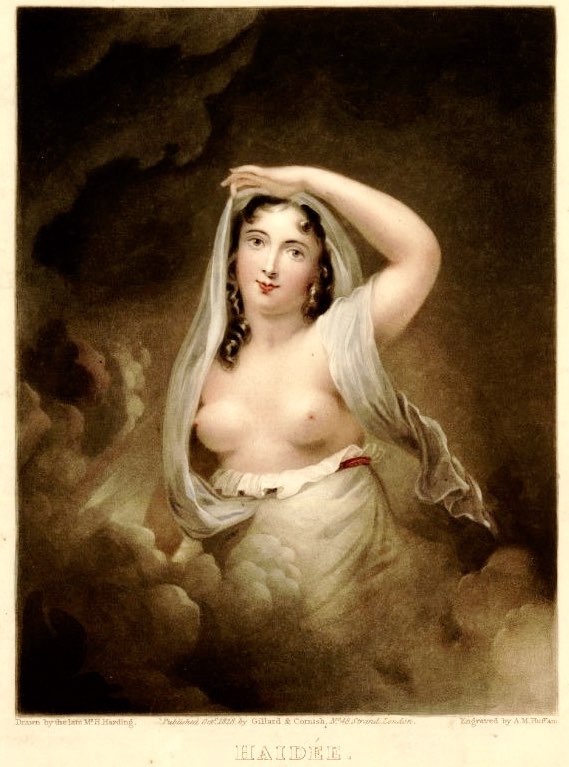 Like all such performances, it has most impact when presented “live”: viva voce.