It all started during a fascinating trip to northern Italy five years ago, where Roger Arias, a musician based in Ferrol, a port city in Galicia, discovers a mysterious relationship with the poems of William Blake. Those mystical and visionary writings, which revolve around the most intimate and deepest longings of the human being with respect to their role in the world, their relationship and harmony with nature, as well as some brushstrokes of social criticism not without a certain sharpness,  awaken the musician’s desire to compose melodies and sing them. This is how Strange Mystery Flower originates; and under this pseudonym he decides to record ten of those songs and publish them with the title: Strange Mystery Flower sing William Blake, with the collaboration of his sister Amparo Arias. But this is another story.

The next step for this intrepid musician and composer was logical: would this connection with the poet Blake be something unique and singular or, on the contrary, would there also be a connection with Blake’s contemporaries – specifically those poets who were part of that famous literary movement known as Romanticism?

After a few cautious approaches with Coleridge, Wordsworth and Shelley, the magic reappears with the reading of some poems by Lord Byron. Reading Byron inspires a  new trip, this time to Scotland and England. Here, inspired by the soaring Scottish landscape and bucolic idyll of the English countryside, the musician composes twelve songs based on Byron’s own poems. 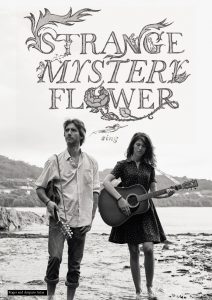 If you would like to listen to some of the music inspired by Byron, Blake, and other Romantic poets, click here.