A CD of music based on Byron’s works from a concert given at the Institut Hongrois on the 6th of July  2016 during the International Byron Conference in Paris.

This recording aims to give a glimpse of the richness and variety of Byron’s work as a source of musical inspiration, from the very beginning of its reception in France to its post-Romantic days of glory in central Europe at the end of the century.

Byron’s poems inspired musicians throughout the 19th century. However, the only works that remain in today’s repertory from this rich musical heritage are a few operas (two by Donizetti and two by Verdi), two atypical symphonies (Harold en Italie, by Berlioz, and Manfred, by Tschaikovsky), the astounding 4th piano study by Liszt, Mazeppa, inspired by Byron, via Victor Hugo’s poem of the same name, as well as a few “Lieder” by Schumann and Mendelssohn. This short list of masterpieces does not by any means illustrate the entirety of the influence Byron had on musicians throughout the century. 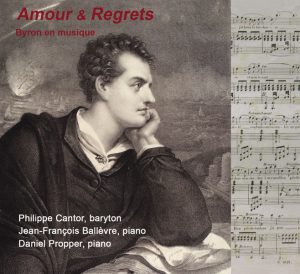 Besides a great number of musical adaptations of his lyrical poems, in their original version or in translation, Byron inspired compositions for piano solo (particularly a series of pieces drawn from Mazeppa but also some from Manfred) together with “dramatic scenes” or “lyrical scenes” for voice and piano based on original poems that were derived from Byron’s poems.

Paris played an early role in Byron’s reception outside the United Kingdom and a major musical role in 19th-century Europe. We have therefore given a prominent place to the early examples of Byron’s influence, especially on musicians established in Paris, before deliberately privileging some forgotten works that deserve recognition. From Amour & Regrets, the earliest setting to music of a French poem imitated from Byron (1821), to Novák’s Ballad after Byron’s Manfred (1893), the music lover will meet some cheeky Corsairs, a few sombre Manfreds, several breathtaking Mazeppas, a spectacular Giaour, and a fascinating Prisoner of Chillon. The latter category of works, which has fallen into complete oblivion today, offers some characteristic examples both of poetical rewriting (sometimes poets did not refrain from changing the meanings of the original poems completely) and of “hybrid” musical compositions, ranging from simple songs to miniature operas.