“The great mover of an intellectual revolution”: Byron and The Liberal 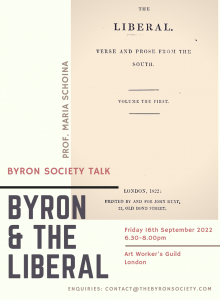 Recent reappraisals of The Liberal highlight its reformist relationship to literature and politics and look at the periodical as an intellectually coherent and forward-looking project which promoted, within its pages, the internationalist tendencies of its writers, multilingualism, liberal knowledge, intellectual community, a dialectical relationship with continental sources, and translation as the new international aesthetic.

Byron’s association with The Liberal marks a crucial and controversial point in his career, as his alignment with the “Italianized Cockney magazine” alarmed both his friends and enemies on the political front in London and precipitated the break with his publisher John Murray. In light of the above, this talk will discuss how Byron’s participation in the ill-fated project exemplifies his current conception of liberalism, of literature, and of their interaction.  Maria will suggest that association with The Liberal, and more importantly, the outcry against the periodical’s freethinking and cultural pluralism, strengthened Byron’s opposition to oppression and injustice and catalyzed his literary sensibility and thought, leading to a drastic change of his perception of poetry compared to the one he held in his early career.

Before the lecture, there will be a walk…

4pm – Free guided walk from the site of John Hunt’s office at 22 Old Bond Street, where The Liberal and Liber Amoris were published, to the Art Workers Guild, 6 Queen Square, taking in various landmarks relating to Byron, Hazlitt, the Hunts, the Shelleys and their circles.

For enquiries about the walk please email: theliberalbicentenary@gmail.com

If you would like to join us for the bicentenary Liberal dinner, please email: theliberalbicentenary@gmail.com

ALSO – do join us on the 17th for the full-day conference on The Liberal. DETAILS HERE.