April 6, 2022 / lordbyron / Comments Off on Un Viaggio del Cuore—A Journey of the Heart

I had always been mildly interested in her as a scholar but, also, so influenced by Byron’s offhand comment in a letter about Claire as “that odd-headed girl”; and Mary Shelley’s thinly-disguised annoyance with her stepsister’s constant presence in her life with Shelley (often tinged with jealousy).  However, as a writer, I came to be fascinated by her as the “almost famous” member of the quartet.  Ironically, Claire outlived all of them (except Edward Trelawny) by many decades and had her much-later “revenge from the grave” when a fragment of her lost memoir was found by historian, Daisy Hay, in a New York public library in 2010.  Hay included it in her book, The Young Romantics, which is where I first read it, causing one of those epiphanies that changed the course of my life and my fiction-writing career.

I knew Claire had been part of the famous literary “haunted summer” in Geneva during 1816 which produced, most notably, Byron’s “Prometheus” and Mary Shelley’s Frankenstein.  And even though Claire wrote a novel, The Idiot (lost over time), and penned superbly witty letters, she never achieved the brilliance or celebrity of the rest of the Byron/Shelley circle.  Mostly, she became known for bearing Byron’s illegitimate daughter, Allegra, and being the “third-wheel” in the various Shelley family households in Italy.  And yet, I had always been struck by her portrait, with its slightly exotic look and half-hidden smile.  Who was she, really?

It turns out, quite a complicated and amazing woman in her own right.

Interestingly, Claire’s memoir fragment gave me a new and very negative perspective on the summer of 1816 as “Under the influence of the doctrine and belief of free love, I saw the two first poets of England [Byron and Shelley] . . . become monsters.”  Even worse, she adds their time there was a “perfect hell.”  It was a vehement contradiction of everything I had read about that magical interlude—primarily from the other members of the quartet.  Her alternate view seemed intriguing, to say the least.  At that point, I had to learn more about Claire through her words and her perspective, which proved challenging.  As Byron, Shelley, and Mary Shelley began passing into legend during the nineteenth-century, Claire became more and more obscure, living out her last days in genteel poverty in Florence, Italy.  She was the one “left behind” in almost every way.

Yet she had a voice.

And it connected with me as an author because I was at a crossroads in my career, recovering from a severe back injury, wanting to pursue my fiction as a full-time writer, and trying to find my own voice.  But I didn’t have a clear sense of how I wanted to do it.  Then, I started to dig for information about Claire and found an old edition of her journals from 1968, as well as the decades-old biography and a two-volume edition of her letters.  I delved into Claire’s checkered life and, gradually, the fragments of her existence came together in my thoughts:  the young, reckless woman who initiated an affair with Byron—the great love and torment of her life; and, the older-but-wiser expatriate, living on her delicately ironic memories in Italy.  Yet she could be vehemently bitter with regard to her daughter, Allegra, whose death she never quite accepted.  So, I decided to tell Claire’s story from those two perspectives, youth and old age, and found my new direction:  a genre-bending historical novel.  It felt right and I dipped my toes into the waters of a new world.

I applied for a grant and had the chance to travel to Geneva and Florence to research the book, which turned out to be only the beginning; it expanded into a trilogy.  Like Claire, I took on new travel adventures that constantly inspired me, from experiencing the bicentennial of Mary Shelley’s Frankenstein in Geneva (and seeing the original manuscript with Percy’s notes), to participating in a writers’ conference in the ancient city of Matera, Italy, to visiting steam caves where Caesar once sat in Bagni di Lucca, near Florence.  My husband even learned Italian so we could manage to chat with local experts in their own language . . . and I finally understood why the Romantics chose to make this country their home; it’s a beautiful landscape full of amazingly generous people.  Through all the travels and research, I had the chance to explore Claire’s story, weaving a bit of mystery around her daughter’s death and pushing myself as a writer every step of the way.  Claire’s Last Secret became the book of my heart, then the sequel followed, A Shadowed Fate.  The trilogy comes to an end this year with the final book, Forever Past, which comes out this spring with Severn House.  I loved every minute of it.

When I first read that fragment of Claire’s memoir in 2015 and decided to write her story, it was a step into the unknown.  I don’t think I could have penned this kind of work as a younger writer because it meant understanding the weight of age and the burden of memory; yet, her story led me to a level of awareness about unheard voices:  they are sometimes the most powerful ones.

They can lead to new horizons, new ways of thinking, and new lives.  It certainly did for me.

It was difficult to let go of Claire at the finish of the trilogy, but all journeys come to an end, something she was only too aware of when wrote of her fear during her final days that her life would be “lost in oblivion.”

I don’t think it will.

January 9, 2022 / lordbyron / Comments Off on Romantic Continuities – Suggestions and Insights

Professor Timothy Webb is writing a new book,  Figuring English Romantic Poets and their Works in Poems from the First World War to the Present. This is an anthology, and he is requesting suggested contributions for the anthology – especially for Byron!

A description of the planned anthology is below. So far, Professor Webb has collected poems about Byron by the following: W. H. Auden, Demetrios Capetanakis, Andy Crofter, N. S. Thompson and thirteen others, Lawrence Durrell, Leontia Flynn, Peter Levi, Edwin Morgan, John Julius Norwich, Peter Porter, F. T. Prince and Susanna Roxman. If anyone has any suggestions to make, especially about Byronic coverage (which is not as strong as it might be and almost ignores the earlier poetry, including Childe Harold), he would be very happy to hear from you! Of course, the same applies to the other poets or to any other relevant issues. Please send all suggestions to him at egetw@bristol.ac.uk.

This is an anthology of poetic responses and re-creations of the lives (or, more properly, selected parts of the lives) of the English Romantic Poets, ranging from the First World War to the present. Quotations from academics are deliberately excluded, unless they are poets primarily or as well, such as Seamus Heaney, Lucy Newlyn, David Constantine or Michael O’Neill. The Romantic poets who have most obviously qualified for scrutiny by other poets are: Blake, Wordsworth, Coleridge, Byron, Percy Shelley, Keats and Clare. In recent times, lesser focus has also been accorded to Moore, Southey, Landor and Hunt. Although De Quincey was exclusively a writer of prose, he has attracted the attention of more than one contemporary poet (unlike Hazlitt or Lamb or Peacock or, especially, the once-fashionable Scott), while the author of Frankenstein (herself not a poet, unlike, say Felicia Hemans or Laetitia Landon or Charlotte Smith) seems to be (with Dorothy Wordsworth) the only woman writer to have received poetic treatment.

For all its apparent exclusivity, I have already discovered well over 200 poems which engage with the Romantic poets, including sequences by Robert Gittings (Keats), Amy Clampitt (Keats), Robert Cooperman (Percy Bysshe Shelley), Lucy Newlyn (the Wordsworths) and a group of fifteen contemporary poets (Byron’s Don Juan). A number of ‘big-name’ poets are candidates for inclusion as contributors: for instance, Owen, Yeats, Auden, Brecht, Geoffrey Hill, Ashbery, Borges, Jaccotet, Hughes, Heaney, Bonnefoy, Lowell, Gunn and Bertolucci. Other notable names include, among many others: Betjeman, Spender, Blunden, Causley, Kennelly, Tony Harrison, Pasolini, Enright, Ewart, Stevie Smith, F. T. Prince, Roethke, Hirsch, Morgan, Davie, Longley, Beer, Fanthorpe, Porter, Sikelianos, Kavanagh, R. S. Thomas, Constantine, Dunn, Mahon, Duffy,  Birtwhistle, Paulin, Szirtes, Muldoon and Greenlaw. Countries other than England are significant contributors: America, Serbo-America (Charles Simic), Australia, India, Africa, Greece, Germany, France, Italy, Hungary, Scotland, Ireland and Wales. All these diverse poems  (many of which are not as well-known as they deserve to be) are of interest in themselves but they also have a lot to tell us about the changing reputations of the poets, the relations between the poets and their lives, and the links between poetry and biography.

This book concentrates on poetry but my introduction and notes will also suggest that a full exploration would need to include the following: drama, films (for the cinema and for TV), art, music of various kinds including opera, musicals, and song-cycles, novels, short stories and children’s literature, not to mention the manifestations of popular culture: restaurants, cafes, hotels, street-names, rock and pop music (Blake is particularly popular in the music world), newspapers, kitchen furniture, hair-dressing salons, graffiti, etc. The Wordsworth Trust has already organized some pioneering conferences to explore some of these possibilities and the unexpected but enduring influence of Romantic examples.

December 4, 2021 / lordbyron / Comments Off on CFP: Byronic Modes of Rebellion

The Byron Society is pleased to announce that it is sponsoring a panel at the 2022 BARS/NASSR annual conference on the theme Byronic Modes of Rebellion, and providing bursaries of £250.00 each for three speakers.

Rebellion comes in a myriad of forms, from teenage angst and misanthropic brooding to political, sexual and religious forms of resistance. 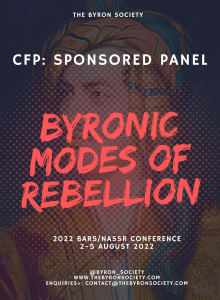 From his carefully rumpled ‘poetic’ attire and sexual preferences, to his involvement with revolutionary groups in Italy and Greece, Byron was and remains an inherently rebellious figure.

The same is true of his poetry, with its daring new forms and highly contentious treatment of sexual, political and religious themes. The poetry of the early 1820s was steeped in rebellious impulses, from the provocative representations of Christianity in works such as Cain: A Mystery and subversive political polemics embedded in Sardanapalus and Don Juan VIII-IX, to the depictions of actual revolutions in the historic dramas.

A subversive figure in his own era, in the last fifty years Byron and the Byronic hero have become stock figures of defiance and resistance to established norms, from David Bowie’s persona of ‘screaming Lord Byron’ to the fictional superheroes Bruce Wayne and Tony Stark.

We are inviting proposals for this sponsored panel around the topic of Byronic modes of rebellion. In recognition of the overall focus of the conference, papers focusing on 20th and 21st century elements are preferred.

The Byron Society Lecture in association with the Institute of English Studies, University of London.

Taking place at The Beveridge Hall, Senate House, University of London, Malet Street, London WC1EW 7HU.
6pm – 8 pm.   It is a free event and open to all comers. 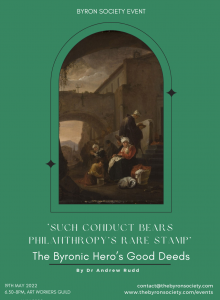