(Credit: The cartoon is by Jim Siergey. Some of these stanzas were first published in Slant).

Don Juan Finish’d is a fanciful completion of Lord Byron’s comic epic Don Juan. Its first ten stanzas introduce the project, make sure the reader knows how Byron pronounced “Juan,” and prepare for a quick summary of Byron’s poem. The epigraph comes from Byron: “Nothing so difficult as a beginning/In poesy, unless perhaps the end”.

There’s nothing difficult as a beginning

In poetry (as someone somewhere said)—

Near endings. Though the hair on Byron’s head

Before he clos’d his epic: he was dead!

Those readers who would see the story through,

Two hundred years: a lengthy time to stew on

Half sleeping at a British breakfast table.

But that’s the sad condition of Don Juan,

The scheme suggests derangement? My position’s:

It’s not the most outlandish of suspicions.

I ask, though, is it terribly unreasonable

To feel “in medias res” as poor a spot

For ending as beginning? Is it treasonable

To tamper with a better poet’s plot?

The horns are where the valiant should be seizin’ a bull.

(The other end, thanks much, I’d rather not.

I know it has its use—with which I’ll try,

In ending this for Byron, not to vie.)

A tale that’s lain here dormant all these years.

Who live so reasonably, dedicating

Themselves to more remunerative careers

A poem whose title I can’t even mention;

For if I say I’m finishing “Don Ju-an”

Though this pronunciation is the true one

Which leaves me in a quandry what to do: one

Can’t say that one is finishing “Don Juan”;

It makes one sound deficient in the head

To finish up a poem one’s never read.

I don’t, of course, expect enthusiasm.

The academics, if they’re made aware

Of my attempt, will feel to fill this chasm

Is not a thing the likes of me should dare.

The more excitable may have a spasm.

“The upstart! Does the bastard even care

That it’s the great Lord Byron he assails?

My word! What next? The Canterbury Tales?”

My Muse, though, scorns such paltry calculations

As publishing and praise. It’s not for Glory

I labour (nor for irking my relations,

Whatever they may think), but for the Story!

For matters less refin’d I lack the patience.

I own a mind that soars beyond such sorry

Concerns as those, and, proving this indeed,

A shelf of work that nobody will read.

So forward!—ah, but first a wee bit backward,

Retracing Byron’s ground, but at a run.

I ‘ll take some pages here to quickly stack word

On word about the tale Lord B has spun.

To those, like me, who’ve ne’er had even one

Book publish’d. No, I’ll use a word far kinder

And call these next few stanzas a reminder,

For I would not insult you by suggesting,

But neither would my poem gain by testing

Your memory; such exercises tire one.

Your day’s exertion ended, with a fire on

The hearth and this slim volume on your knee,

Far separated from your library.

The perfect aid for you in this condition,

The most enlight’ning method to remind one

Would take the two related works and bind one

Up with the other in one large edition.

My publisher, however—should I find one,

Will be too stingy. I’d best summarise. 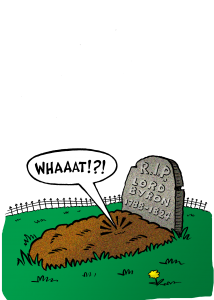