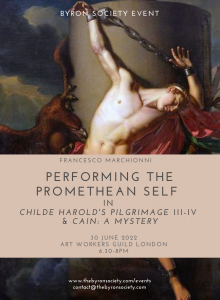 Such a process of mourning reveals how the dwindling drives of the imagination and fictional selves are forced into confrontation with their own entropic fates.

The travel narrative of Harold, the ruinous Venetian landscape and Cain’s will to transcend eternity each fictionalize a Byronic vision of poetry, a visionary mode in which imaginative and aesthetic self-fashioning discloses a fragmented identity. Artistically and existentially torn between creativity and destruction, Byron meditates in his depiction of Harold, Venice and Cain a view of poetic writing alert to the moral conundrum of the Promethean figure tethered to the Caucasus for his ‘Godlike crime […] to be kind’ (‘Prometheus’, l.35). This punishment of the titan, for Byron, not only problematizes the binary of good and evil, but also symbolizes the poetic self divided between ambition and deception. Francesco Marchionni considers how Childe Harold III-IV and Cain register Byron’s meditations on his Promethean identity endorsing grief as a necessary contingency for poetry itself.

Francesco Marchionni is a PhD student in English Literature at Durham University. His doctoral project ‘Promethean Forms of Grief in the Work of Byron, Shelley and Leopardi’ recasts Lord Byron, P.B Shelley and Giacomo Leopardi’s interpretation of the Promethean figure as poetic trope through which these writers re-imagine the conflicts of Romantic identity. Francesco was awarded a Stephen Copley Research Award (2019) to carry out archival research in Weimar (Germany) and the Byron Society PhD Bursary (runner-up). 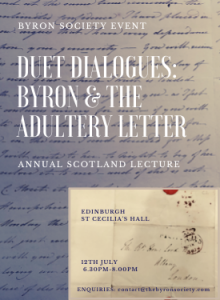