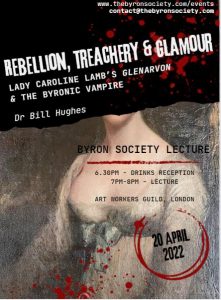 In ‘The Vampyre’, John Polidori famously transformed the grotesque monster of East European folklore into its sophisticated aristocratic literary avatar.

His importance cannot be denied but he did not quite get there first; his harnessing of the Byronic persona as political satire and Gothic motif drew on his own troubled relationship with the poet, but also on Lady Caroline Lamb’s notorious roman à clef, Glenarvon (1816). Lamb turned her own attraction-repulsion to the poet into a Gothic and sentimental fiction of amatory seduction and betrayal alongside political revolt. Here, the eponymous Glenarvon is notably Byronic, feeding off Byron’s own self-fashioning and Lamb’s mimicry of him, while drawing on Milton and Richardson.

Dr Bill Hughes considers how Polidori’s revision of Ruthven inaugurates a literary archetype – an aristocratic demon lover who is both Byronic and a vampire. Lamb and Polidori thus inspire a series of vampiric heroes from the Brontës to the Gothic Romance of Du Maurier and others, and the sympathetic vampires of paranormal romances such as Twilight; he is ‘arch fiend’ and ‘fallen angel’, and howls at the moon (his ancestor drinks blood from a skull).