We’re talking to author Megan Franks whose debut novel, The Lord Poet, was inspired by the life of Lord Byron.

Why Byron, or rather why a fiction involving Byron?

I have always been fascinated with society and morality and what makes those rules effective. When I researched Byron, I found him to be an anomaly, in that he seemed to follow his own moral compass. This isn’t an unusual characteristic per se, except in the instance that his lack of adherence to rules seemed to stem from his broader perception of the world vs. a genuine dislike for authority or something of the like.

I had heard of Lord Byron before, but I didn’t know his story. I was scrolling through social media one day when I came upon an article about his life. When I read it, I was immediately drawn to him and knew that I wanted to write a book inspired by his life.

Do you find anything troubling or disturbing about Byron’s character, and have you added that into your book?

The more I study Byron, the more I feel a sense of empathy and compassion for him. His early life wasn’t easy – growing up without a father and with a mother who seemed to suffer some mental health issues, and then a nurse who (is assumed to) have taken liberties with him that were highly inappropriate, I can only feel sorrow for the childhood he must have had.

With that said, however, he seemed to be quite liberal when it came to alcohol, morals, and female (and proposed male) companions. He had an air about him that said: “I’ve been places that none of you could ever dream of, and therefore I know things about the world.” And I think he used that, along with his attractiveness, to his advantage to make him appear exotic and alluring to women.

I found Lord Byron’s character so intriguing that I used a lot of the aspects of his personality when I created my main character, Lord Troy.  Lord Troy and Byron are both incredibly handsome and charismatic but also suffer from underlying emotional distress. Both have a certain sense of elitism while being simultaneously fascinating. They both struggled with their perception of the world and their willingness to adhere to morals they didn’t perceive as being necessary. 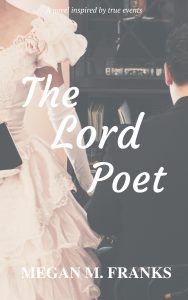 What’s the premise of The Lord Poet and why would people who love Byron enjoy it?

I think The Lord Poet will appeal to people who love Byron because it exposes all the things about Byron that we sit back and think, “what would happen if we did that?” or “who would be brave or bold enough to want to do something like that?”

It exposes the secrets that we all want to know—what happens behind the closed doors of the manor of a renowned poet who tends to disregard social norms in favour of pleasure or his own broader “view” of the world!

What is your favourite Byron fact?

I think my favourite fact about Byron is his intense love for animals. He had numerous dogs and even once had a tame bear!  Upset with the rules at Cambridge (stating that he couldn’t have dogs on the premises) he kept a bear there instead!

Do you find that you have any similarities to Byron?

Sure! I think we both really enjoy(ed) nature and saw the beauty and tranquillity in it (and sometimes the darkness to it as well). And we both have an intense love for animals. I have two cats that I adore. If I could have more, I would!  I also believe I share the same dry sense of humor and love for satire and sarcasm, much as Byron does. He is a fascinating individual, and I hope I am a fraction as interesting.

Now that the book is finished what are you planning to work on next?

I’m taking a brief break from writing to spend the summer with my children – enjoying our time together before they go back to school, but I have plans to return to writing in the Fall. I am the most content when I can spend the day clicking away at my keyboard. I’m a big fan of history and enjoy historical fiction, so I’m sure my next work will involve something historical brought back to life or reimagined.