‘Vampyre, ghost, or goul, what is it?’: Byron’s Samuel Rogers 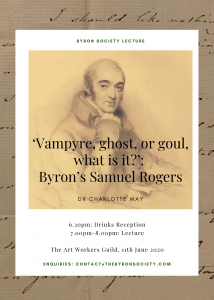 In this lecture, Dr Charlotte May will explore the relationship between Byron and Samuel Rogers. The banker-poet Samuel Rogers (1763-1855) was one of the most important literary figures of the Romantic period.

Not only was The Pleasures of Memory (1792) one of the bestselling poems of the era, but his literary networks were some of the most extensive, crossing generations and professions to include everyone from Charles James Fox and the Duke of Wellington to Mary Shelley and Elizabeth Gaskell. Byron’s relationship with Rogers began with appreciation for the doors that Rogers could open for him in society as well as his poetry, but ended with Byron writing in a “private” letter to John Murray that Rogers was ‘the Cancer of his Species’. This talk charts the development of this fascinating relationship, and how Byron’s relationship with Rogers sheds light on two of the best known figures of literary society in the Romantic period. 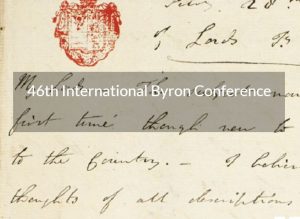