Romanticism thrives on contradictions; conjuring up images and ideas of acquiescence in the sad Wordsworthian “music of humanity” (‘Tintern Abbey’) and in pastoral serenity on the one hand, it is, on the other, defined by transgressiveness, overreaching and the repudiation of boundaries. While political boundaries are often daringly crossed in Percy Bysshe Shelley’s poetry, it is intriguing to see that, aesthetically speaking, even radicals such as Shelley (persistently) abided by the strict and apparently restrictive patterns of sonnets, odes or terza rima forms.

Although tending to be conservative in terms of aesthetics, Romantics seem to prefer to undermine and challenge the metrical and stanzaic grids they inherited from Dante or the Italian Renaissance and to fill their poems, plays and novels with explosive and transgressive contents. This conference, which is organised jointly by the IABS and the GER, will therefore focus on the tense relationship between restriction and transgression in politics, religion, morality, sexuality and gender which underlies and imbalances many Romantics’ works. Apart from the Shelleys, Keats, Coleridge and other Romantic period writers, the conference will also focus on transgressions in Byron’s works. While subscribing to the time-honoured and venerable form of the verse epic, subjecting himself to the constraints of the ottava rima form, Byron’s Don Juan is the byword for transgressiveness, for breaches of taboo and trespassing upon forbidden territory.

While Byron pleases himself in the role of the transgressor and scoffer, venting his anger on the previous generation of Romantics by denigrating them as conformists and cowards, it will be an intriguing challenge to re-cast and re-evaluate many other Romantics as challengers of limits and boundaries, as intruders upon the consecrated ground of taboo.

Proposals for 20-minute papers are invited on aspects of boundaries, limits and taboos within the context of Byron and Romanticism. Topics might include (but are not limited to):

– Peterloo as a Trigger for Romantic Transgressions

– The Chameleon Poet as a Transgressor

– the Art of Overreaching and Underreaching

– #HeToo: Sexual Transgressions in Byron (and Others)

Please send abstracts of approximately 250 words to the conference convenor (norbert.lennartz@uni-vechta.de) by 15 November. 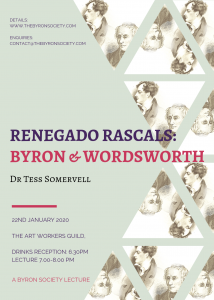